Hi everyone it’s me again,
So this past week we were given an assignment to paint a building of some sort to a blank background. In watercolor that’s taboo, but we tend to like to break the rules a little. Hehehe. Well anyway, this gave me the motive to go and call the realtor about my favorite house in the whole real estate book in which I had pasted in my journal as one of the world’s most beautiful homes. (EEEEEEE!!!) that’s “quivering with glee” in translation. I made James go with me, and though feeling there was no real point in seeing a home we can never afford, went along for the joy ride anyway. Good thing I married a joy ride man, or I’d be in big trouble!! The realtor was kind enough to take time out of his day to show us the house we can’t possibly afford. $200,000 home (I know CT people, can you believe it??) four bedrooms, 1 and ½ baths, gorgeously large backyard, a window in the kitchen placed thoughtfully in front of the sink (so you won’t get bored looking at a wall when doing the dishes but can watch your kids play outside), a beautiful sun room (MY STUDIO!!!!) and there was even a hot tub to be left behind! ***hazy heavenly puffy things surround us*** The funny thing was, it reminded James a lot of his Nan’s house, from the door knobs to the excellent use of closet space. It had inspired him on the way home to figure out how much he would have to make in order to afford it. We calculated everything down to the interest of a thirty year loan, but alas, we are but poor college students with a dream. SO I decided to immortalize it!!! Hope you like it, I changed the pine tree into some gorgeous oak, and the cement walkway into a brick dream walk. Nevertheless, it passed on the assignment. James was wondering how you could paint a white house on a white background. Just don’t put anything on the page, right? Well I purposely made it so you can’t see the left side of the house or the left column because of the beautiful white sunlight. I dunno, maybe one day I’ll be asked to paint rich people’s houses or something. But at least you all get to see our healthy real estate dream.
You won’t believe this, but I found out just last Friday that the eagle rock art museum in Idaho Falls (30 minutes away from us) was holding a contest!! It was called “Idaho paints Idaho” and I could submit up to two pieces of my work in jpeg form on a CD of paintings that were painted in Idaho. Well my car was painted at “Rex’s auto Body” and this house was painted on Ridge street in Idaho Falls. I had just a few days to submit my work. I took my paintings to a professional photographer who (after like 2 days later) managed to produce some nice photos the day my work was due, and the moment I was leaving for Idaho Falls to give it to them (august 2nd)! It was kind of stressful, I wish I had found out sooner so I wouldn’t have been such a last minute girl! but I even made a PowerPoint presentation on my CD (I found out later it had 2 errors on it, and I’m kicking myself for it!) but that’s what you get last minute. They were submitted, and I’ll find out if my car and/or house were accepted by the judges to be put up on the wall! (yay!) K, I’ve talked enough for one day.
Laura 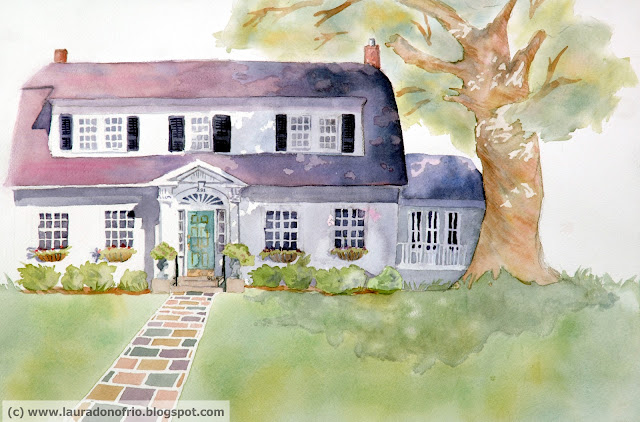