Hi everybody,No, I’m not expecting, that’s the title of this picture (sorry!!!). This past week’s assignment was 1/2 sheet of whatever we wanted, so I thought it might be a good idea to take another stab at painting people again…and again I feel the final result didn’t turn out as good as I had hoped. I just can’t seem to get them to look like…them!! But I always wanted to make a painting of a pregnant woman and her husband, because I don’t know about you, but pregnant women are beautiful. 🙂 I happened to know the perfect couple in mind. She’s in my child clothing class, going on a week before the baby is due now, and she always looked so glowing and beautiful! And her husband would always come in at the end of class to see how she’s doing. I didn’t even know their names, but when I figured out what I wanted to do, I made lots of sketches of poses I wanted them in, and planned it out in my mind. I wanted her to wear a white shirt so the light can glow from her, and have them be in front of a window in the Clarke building, where at around 5pm the sun is going right into the room and would hit them so they glow on paper. I hoped and prayed she didn’t have her baby before class. She thankfully didn’t, so I asked her name (Heidi), then I asked her if she and her husband (his name I found out was Tony) could model for me on an art project I’m doing, and I would give her copies of all the pictures I took. She happily agreed!!! Let me tell you, the pictures I took of them were just adorable!! I wish now I would have done a different picture of them, but I chose two. From her belly up was one picture, and she had her legs apart which I didn’t like, and in another picture her legs were together, so from her legs down was the second picture. It worked out really well. I don’t think I did a very good job on some things, and I’m not going to point them out, I just feel I could have done better because the picture of them is prettier. Anyway, I hope you all like it though! I hope one day I’ll get better at painting people. Besides, in watercolor you can’t erase your mistakes, you can only try to fade it with water. But don’t you worry, people! Next semester is going to be oil painting 1, and if I hear if I make mistakes on there I can either scrape it off or paint right over it! (JOY!!) But I am glad I have taken watercolor first because it is forcing me to not make so many mistakes. I hope in this one I’ve somehow captured a beautiful moment between two people who are very excited about their family.
Laura 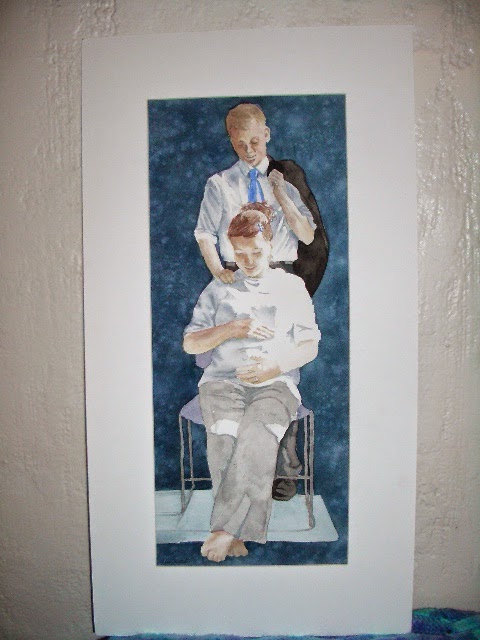