In 2016, I put the paints and brushes away,
not knowing when I would be able to bring them out again. My third baby was so
small, and there was no block of time
available for me to paint. Such is the sacrifice many mothers make – we often
have to set aside our dreams for our children. Painting is not like sewing,
where I could easily stop and tend to the children and then because water has
its own mind, and left alone while still wet, it can decide to go all sorts of
directions! It is a delicate process, and requires all my focus. Putting my
trade away was a painful thing to do, and whenever I thought about my Sacred
Art series, I would have this pull in my heart. I’d tell myself that I cannot
give up hope, I will paint again soon, and that God would provide a way for me
somehow.
In December 2016, a friend of mine, Karin,
who had seen me begin this series from its onset, offered me the best Christmas
present any friend could give. She wanted me to drop my kids off Friday
mornings, for the sole purpose of finishing the series I began. What a gift!!!!
She is a gem, and I am so grateful for her and the gift she has given me. I
look forward to my Fridays now. And so began painting #8.
I’ve had an image of “Remission” in my mind
for some time. I knew that I needed a painting to touch on the true gravity of
Christ’s atonement for each one of us personally, and that gravity to be fully
realized by an individual coming face to face with Jesus. This is the most
emotional piece I have ever created, and honestly I did not think I was skilled
enough to be able to pull it off. It took me some time to find the right model,
and I see now that God had a purpose for that, so I could refine my portraiture
skills enough to accurately portray this particular individual.
This model had to be someone who had
experienced some sort of difficulty in their life. I asked a woman first, going
off her smart whit and her beauty, but she didn’t feel she could bring to this
piece the emotions that it needed. Searching for another year, keeping my eyes
and ears out, I finally found the perfect person. He was recommended to me by
my sister in law, and knowing him myself, I couldn’t believe I didn’t think of
him sooner!! His name is John Rice, and before coming to Christ in his life, he
had experienced some dark roads with an addiction. He had to repent and feel a
sorrow so deep, and was eventually lifted from the burden he carried for so
long. John is now a changed man, and I’ve always seen him as someone who’s soul
is on fire. He is always so happy to share his story with others, and about
Jesus who had changed his entire life.
It’s daunting to ask someone, anyone, to
model for a piece of this nature. But John took the offer with the kindest of
hearts, and said that not only would he do it, but he felt honored to be the
man. John brought what I think not many models could pull off in a photo shoot.
He laid down his whole soul, and I could see it clearly in the images we took. 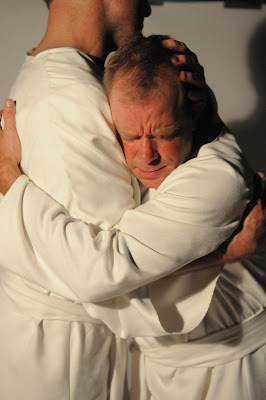 “Remission” depicts a man who when He meets
Jesus, realizes He indeed exists, and is overcome with remorse. He falls to the
floor and sobs at Christ’s feet and tells his Lord “Had I known this was all
true, I would have been a different person in my lifetime!” Jesus is
surrounding this man in his arms, and offering his grace to him, trying to lift
the intense sadness that this man feels. I know that the Savior wants to
forgive us of our trespasses.
1 John 1:9 “If we confess our sins, he is
faithful and just to forgive us our sins, and to cleanse us from all
unrighteousness.” 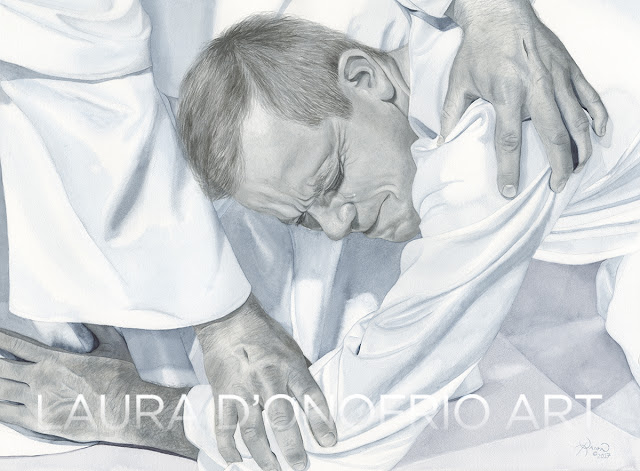 Here are some pieces of music that inspired me while I was painting this piece:
“Immensities” by Craig Armstrong and AR Rahman
“This Place is a Shelter” by Olafur Arnalds
“Sanctuary,” By Assassin’s Creed 2
I hope that when we look at “Remission,”
something might stir within ourselves. Perhaps we will remember a time where we
made a grave decision, and felt a sorrow so deep, and guilt within ourselves
for that decision. Or perhaps we would feel the pain in our hearts what we
inflicted upon someone else by our actions. I hope we will know that there is
someone we can go to, someone who can lift us from our guilt and sorrows, and
has indeed felt every infliction we have made. It is the ultimate sacrifice
Jesus chose to make for us, and because of that we can all be given the sacred
gift of the remission of our sins.
A special thank you to Brent Alvord, who is
my Jesus hands, to John Rice for bringing an extremely personal piece to this
series, to Christine Simmons who
helped me capture this image I had inside my head, and to Karin Guynn for
watching my children so I could share this message. I could not have done it
unless all of you were there, and I thank you so much for your help and
support. 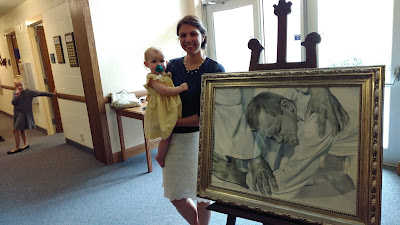