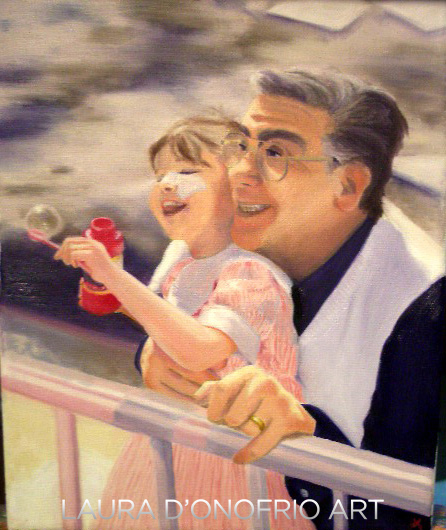 
My aunt recently asked me if any of my paintings are for sale…the answer is YES, they are! Please buy them off my hands so I can be able to pay for my schooling! I know that the best way a business can be successful is through word of mouth, so please spread the word that I’m an artist and am happy to do requests of almost any kind. I will say, however, that this painting I will be showing you is not for sale.


My final project in my painting II class was to paint a self portrait. It could be any expression that we wanted – a view from a mirror, everything that makes who we are, a head study, us as a child, the exploration was up to us. I already knew what I wanted to paint the moment he said it, and it was a feat I desired to confront. I’ve only done one portrait, and that was a head study and it wasn’t very good. I was timid in confronting this assignment because it was something I didn’t want to mess up. Have you ever been faced with a challenge and you want to be successful in completing it because you want to prove to yourself that you actually can? Well that’s what this assignment was to me – a personal challenge. I have always wanted to make a good portrait, but more importantly, I always wanted to make a portrait that actually looked like the person. That’s important, isn’t it? I have been able to do it in watercolor a few times, but oil is a more difficult medium for me. Well, like I said, I knew exactly what I was going to do, and I am going to tell you all about it.


One of the things I did as a kid was rummage through my mom’s old boxes of stuff. The basement was like searching through treasure, and I would find lots of cool things that I’d call my own and bring into my room. (Sorry mom, I repent today!!). There was one particular box that I loved to look in, and that was the box full of pictures of the past. What kid doesn’t want to see pictures of when they were little, and what their parents looked like back then, etc? My mom always told me to not go in there because I would always mess up the order of the pictures and separate the pictures from the negatives so she couldn’t make duplicates. (Once again, I’m sorry mom!!). There was one time I found a picture that I truly loved, and it was of me and my grandfather whom I called Pop Pop. I’m wearing a little pink dress, there was something white on my face, he has his arms wrapped around me and we are both smiling as we are looking at a soap bubble I made on the wand from my magenta bubble bottle. But here’s the really cool thing: The picture came from a roll of film that was somehow damaged, and the bottom of the picture has a white cloudy look, and the picture was tinted pink. From that description it sounds ruined, but in all actuality, it gave the picture a kind of…heavenly clouded look, as if someone were imagining a scene from the past. It was really beautiful. I took that picture (parted ways from the negative), and set it in a frame in my room that had a pink flowery border. It was perfect. One thing many of you do not know is that my grandfather died of cancer when I was in first grade. I don’t know what type of cancer, but here is something really interesting to know: My grandma told me that when I was really little, my grandpa said to me that for my birthday I can have anything I want and asked me what I would like. I told him “Pop Pop, I want you to stop smoking.” The day I told him that he quit cold turkey. He never touched another cigarette again. But it’s sad to me that he died of cancer, and I hope it wasn’t because of the addiction that he so faithfully discarded. The picture that I stole from my mother’s box, I think I looked around five years old. It was not much longer after the picture was taken that he passed away.


On one of my visits to my Dad’s, I brought my picture and frame with me and showed it to him. Dad loved it, he adored it, he loved it so much he actually stole it from me and put it in his room!!!!! I asked him many times to give it back, but I think I understand now why he didn’t, because that was his dad, and his little girl, caught in the world’s most perfect moment, with the two of them together. It sat on his nightstand, and the light ascended on it every day from the window. The picture today is different than the one I first had because of the sun damage. The color has actually turned a really cool maroon instead of pink, making it look a lot more antique. About a year ago, mom was in the process of selling her home. I decided that before she finished packing everything away, I would go searching in that same box for the negative of that picture. It took a while for me to find it (mom hid it because I kept messing everything up in it), but I did find the box, and after searching through thousands of pictures, I found the group it was supposed to be in. There were negatives with the pictures, thank goodness. Looking at the other pictures, I finally realized what that white thing on my face was. A short time before the picture was taken, I was at my parent’s friend’s house, Bev and Neil Buckley. From the story I heard, a cat came into their house that had just been in a cat fight. I went to pet the cat, and it lurched at me and bit my cheek. I have no idea what Bev and Neil must have thought, but they took me to the hospital and all I remember was being really scared and screaming on a cot with some people with masks hovering over me. I got stitches, and they put some white gauze and tape over my cheek. That was the white thing on my face!


When I found the negative, I made two prints, one for me and one for my grandma. I now have the original pink picture again. This past Christmas, Dad and Irene gave me a beautiful gift: a frame that says “Good memories last forever. Laura and Pop Pop, in my heart always,” and the picture was the maroon picture. Dad has always kept nagging me about painting this picture, but I have been reluctant to because I didn’t think I would do a good job in rendering this picture. However, in this assignment I knew I had to take on this picture. Not for my dad, it was just to see if I could do really do it. Could I really recreate a picture I have seen for so many years? Well…I don’t think I did, but I do think I came pretty close.


Since it was finals, I wanted to buy a canvas that was small, so I could do it in less time and be able to work on other things I needed to do. You would think that the smaller the canvas, the smaller the space, the easier it will be to paint a picture. WRONG!!!! I thought that too! I now am more the wiser. Remember the mailboxes picture, how it took me over twenty hours to paint? This tiny 8 x 10, compared to that 20 x 24, took just as long, if not longer, I lost count of the hours! Because it was a small canvas, everything had to be rendered small. I used a teeny brush with, I swear, had like 10 hairs. I painted most of the picture using this tiny haired brush, which in turn took just as long and far more painstaking compared to the mailboxes. It took me almost every evening for two weeks to finish it. From 5pm till 11:30 I was slaving away, and I think the security guy knows my name now because he always kicked me (and James, he was faithfully there by my side) out at closing time. When the time came for it to be due, I was not finished, but I was to a point that no one would notice. I don’t know what grade I got, but it doesn’t really matter. That same evening I finished the last details of my painting, and put my brush down saying it’s as good as it’s going to get. Every time I walked away and came back there was always some major problem to fix, but now I must say that whatever errors there are, I’m done trying to fix all the never ending problems.


I have two pictures for you. The first is a picture my dad scanned in for me. It is maroon picture. I’m sorry I don’t have a scanner to put in the pink picture that I have.

The other picture is the picture I painted, and I used the reference of the picture that I had, the pink one. Whatever you do, please don’t try to compare the two, because I know I didn’t render it all as perfect as the picture! Try to see the painting as its own being, because after a while I threw out my photocopied reference and just worked on what looked best for the painting. Here is my pride and joy: “Grandpa and Me.” 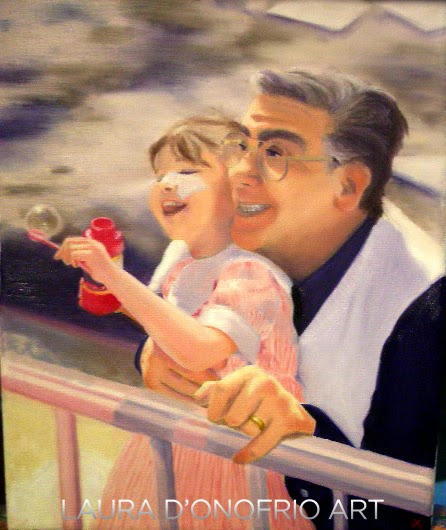 Even though it isn’t “just like the picture,” I do feel accomplished in this work. In all the hours I worked on it, I learned a lot about creating a portrait, and I do hope that future portrait oil painting will help bring me to a better understanding and greater abilities of rendering in the future. I hope I didn’t bore you all too much! I Hope your lives are going well, I love you all, and be sure to seek out to conquer your own personal challenges!