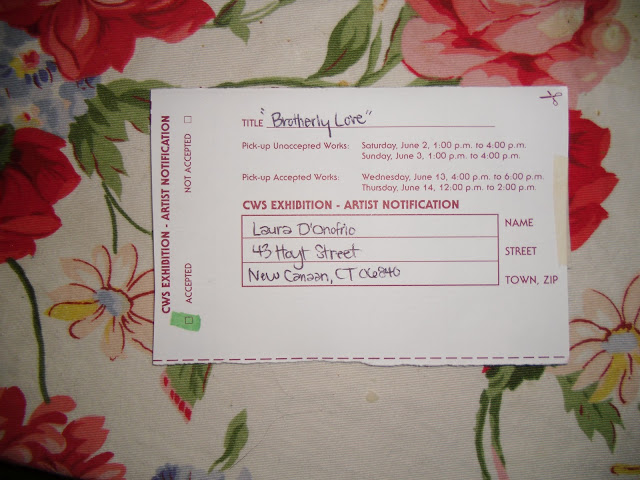 Hello Friends!
I suppose I should mention a little milestone that I hit in the month of May. The middle of the month was a call for entries to the Spring 2012 Connecticut Watercolor Society Annual Show. In Spring 2010, my painting “Megan in January” was not only accepted but received the Esther Fay Memorial Award. If my work was accepted a second time to a future show, I would be invited to become a CT Watercolor Society member (for artists it means putting a little something extra on their resume.) After trying three separate times in the past of submitting my works, and having them not accepted, I figured instead of getting discouraged, to keep on persevering no matter what to get that second acceptance into a show. Usually only half of all artwork that is submitted to each show gets accepted, so it’s difficult to get into.

In the previous 3 shows that did not accept my work, I was submitting subject matters that were not portraits. This May I decided to enter one of my portraits again, the “Brotherly Love” painting, with the idea that if this subject matter was accepted into a previous show, then perhaps portraits are what the public enjoys best of me. Entering this time was quite comical, because it was the first time driving up to Hartford and back with my 9 week old baby, and it happened to be poaring rain outside. Just imagine me throwing on my moby wrap, then grabbing my infant, and then a watercolor painting wrapped in a blanket, while rain was coming down in buckets! As I was doing this I just kept thinking to myself how I must be pretty devoted to brave this weather while balancing two very fragile things against my body at the same time. When I came inside there were several people who made cute remarks like “You must be carrying two priceless treasures.” I was: two masterpieces, one made by my hand and one made by God’s. The man asked at the desk if I was a member (so he could know how much to charge for my entry). I said I was not, but if I get into the show then I will be! He laughed and said “That’s the spirit!”

I like to think that I might not have gotten in necessarily for my painting, but that I put on a good show that day for the effort to make it in…I received this card in the mail a week later! 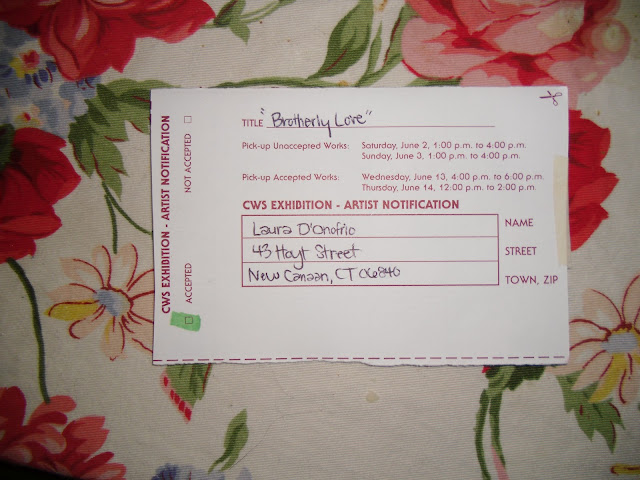 I was SO STOKED! This means I get to BE A CT WATERCOLOR SOCIETY MEMBER! WOOHOO!! James, Caleb and I all went up together (Megan stayed with her aunt), and we attended the opening. There were so many beautiful works of art. James kept talking out loud how certain pieces weren’t as good as my work, and why, and how they could have painted it better…I hope he didn’t offend some of the artists that were in ear shot, but we secretly enjoy critiquing since we do it all the time with my own work, and art is always open for opinion because there is no true right or wrong. It is freedom of expression of the artist, as well as freedom of opinion to the viewer. There was one piece that was called “mud”…absolutely atrocious and ugly. Just a bunch of brown and black splotches on paper. But we must also say there were plenty of wonderful works, some breathtaking. One was of a fish that was just caught by the hook, and the artist happened to sneak in some powdered glitter dust on the sides of the fish, making him glisten in the light. There was another of a deer standing right outside a gnarled and expansive winter forest filled with branches and trees tangled all together. I was in awe at how much time it must have taken to create that forest.

Then there was my work. Several people wondered if it was a photograph, until they got up close and saw the watercolor. Some told me it was their favorite in the show, and I think it’s because of the sweet feeling it brings to the viewer. Anyone who has been in love, or ever raised children, has a connection with this piece. I am once again so grateful for Jamie Handy and Lillian Hoyt for allowing me to paint their picture. 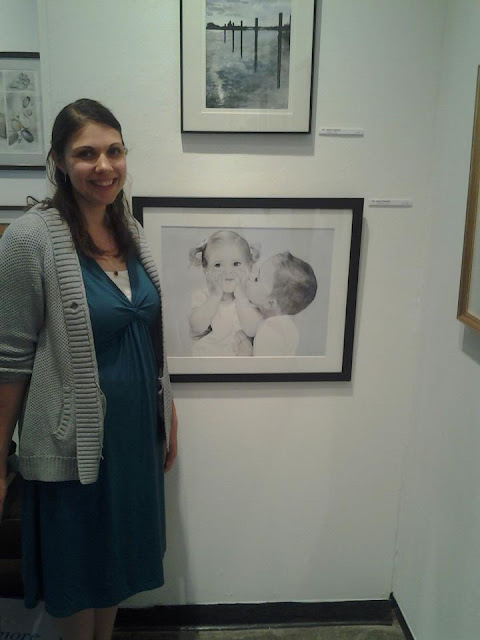 I also entered this same piece, “Brotherly Love” into the National Watercolor Society Show in California, and will know in late June whether or not I was accepted. I don’t expect to get into this show as much as I had with the Connecticut Watercolor Society (there are many incredible watercolorists that I’d be competing with). But I thought I’d enter anyway just to say that I tried. I also plan on submitting “The Most Precious” sacred artwork into the International Art Competition held in Salt Lake City in October. Those are my next goals, to be nationally recognized. Who knows how soon or far away that might be!